Human development and creativity in Spain 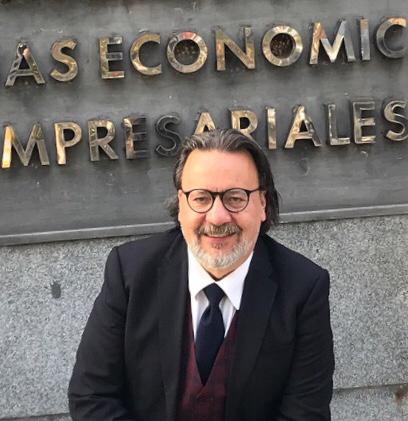 Pablo Coto Millán. Article about the effect of creativity on human development in Spain

This article is a summary of the paper presented por Pablo Coto-Millán, Lucía Inglada-Pérez, Vicente Inglada-López de Sabando y Pedro Casares-Hontañón in XX Worl Economy Congress (Coto-Millán, Inglada-Pérez, Inglada, Casares (2018)). We propose a model that explains the effect of creativity on human development measured by the Human Development Index as defined by the United Nations. This index accounts for the variables of health and education, thus providing a wider approach to economic growth than the traditional focus that only takes into account production and income.

A decade has passed since the beginning of the economic crisis and it proves to have had devastating consequences on Spanish society and economy. The exponential growth in the levels of inequality and poverty has set alarm bells ringing, with this being one of the main causes of concern among citizens according to sociological research.

The decline in the social fabric of Spain has led to increased interest in research into the factors determining it; there is no doubt that it represents one of the most significant challenges when designing the economic policy. In order to carry out adequate research on this subject it is necessary to consider different approaches of the human development concept that differ essentially from those traditionally used in the analysis of growth resources, which relied on the reference standards of the Gross National Product (GNP) and income. Along these lines, it is claimed that the Human Development Index (HDI) developed by the United Nations in 1990 from the methodology of the United Nations Development Program (UNDP) is a successful indicator that measures the population’s living conditions. The HDI measures three aspects: health (the capacity to enjoy a long and healthy life), education (the capacity to acquire knowledge), and per capita income (the capacity to acquire consumer goods and services).

Within the context of the theory of economic growth, Florida (2002a and 2014) provides a new approach that he refers to as of the creative classes. This approach relies mainly on the significant effect of the group of workers employed in what he calls creative occupations on economic growth. The transition from the industrial society to a society based on knowledge is linked to his theory of creative classes. Economic growth is currently based on knowledge, innovation and skills rather than on natural resources and high-scale production, which constituted the driving force of the economy in past centuries.

Although some analysts have considered this approach to be a mere variation of the concept of human capital, this methodology has undoubtedly generated a wealth of research that compares the different magnitudes reached by the creativity index in various countries, regions or cities, particularly in comparison with economic growth measured by means of production, employment, income or wages. However, aspects of social welfare have only been dealt with superficially in the international literature on creativity, in particular those of the living conditions of society. For this reason it is highly relevant to research the effect of creativity on human development by measuring aspects such as the quality of life.

The essential aim of this study is to check empirically the effects of creativity on the human development in Spain as measured by the Human Development Index. The model compares the statistics for a panel of Spanish autonomous regions for the 2002-2010 period. Creativity has been measured by using the concept of creative occupation as defined by Richard Florida, determining the percentage of creative workers in each territorial unit for the period studied. We have also studied the effects of other variables such as productive capital, social capital, and human capital on economic development, in addition to the existence of convergence in the standard of living during the period analyzed.

With these goals in mind our research has the following structure. In section two we analyze the concept of human development based on the Human Development Index, and the main aspects of the theory of creative classes in relation to the aim of this research. Finally, we present the main conclusions in section five.

The Human Development Index used in this research estimates the development of the standard of living of Spanish society. It serves as an indicator of the level of economic development of countries combining health, education and income measures. It was first published in 1990 by the United Nations as part of the United Nations Development Program, and its essential characteristic is that of measuring people’s capacity to cope with life rather than their achievements according to the views of the Nobel Prizewinner Amartya Sen. Its use has spread widely, especially since the economic crisis as from 2007, as it is generally agreed to be a more revealing indicator than income or production when studying the conditions and quality of life of human beings, as well as the level of development of a society and convergence in standards of living.

Herrero et al. (2004, 2010 and 2013) explain in detail the characteristics of this indicator of the living conditions of the population, as well as its evolution over time. As the direct measuring of the capacities involves a series of difficulties that are hard to overcome, the methodology developed to elaborate this index is based on the selection of some performance variables that allow the inference of the associated capacities. The HDI accounts for three aspects: health (the capacity to enjoy a long and healthy life), education (the capacity to acquire knowledge), and income per capita (the capacity to acquire consumer goods and services). Health is assessed by taking into account life expectancy at birth and education is measured by taking into account a combination of different levels of schooling, and standards of living are measured by the income per capita logarithm. The final HDI synthetic indicator is the geometric mean of the standardized indices of each of the three values mentioned.

As a synthetic indicator the HDI was originally simpler and only accounted for part of the human development concept, as it did not refer to other relevant aspects such as inequality or poverty. Some of these aspects have been included in the latest version of the index.

During the last two decades of the 20th century, all the new endogenous economic growth models developed shared the common approach that the production of ideas is the essential powerhouse of economic growth. These include the outstanding models developed by Romer (1986), Lucas (1988), Romer (1990), Aghion and Howitt (1992), and Young (1998). The common assumption of the latter is that the growth of income per capita is essentially related to the development of ideas, in other words to human capital. One of the best-known applications of the Solow model is the study of economic convergence between countries and regions. Economic convergence has been an outstanding issue in the literature of economic growth in recent years (Barro and Sala-i-Martín, 2009).

Finally, an outstanding milestone in the literature of economic growth is the so-called creative class theory. In his book “The Rise of the Creative Class” (Florida, 2002a), and also in his numerous subsequent publications (including Florida, 2002b, 2002c, 2002d, 2005a 2002b, 2006 and 2014), Richard Florida has proposed his new theory of regional economic growth. He suggests the existence of a new mechanism driving economic growth that is based not only on accumulating more knowledge but also on creativity and a tolerant and bohemian lifestyle. He supports the idea that we need a better understanding of the factors that generate human capital and allow territories to attract it. He finally concludes that human capital flows dynamically rather than being a static resource or stock.

This methodological approach was an important milestone in regional economy and is essentially based on the existence of what Florida denominates “the creative class”, which is characterized by a high level of creativity and innovation. In short, he defines the creative class as a group of people who may not necessarily have a high level of education but who carry out their professional activities in creative and innovative jobs.

According to this methodology, those cities and regions with a higher percentage of their working population included in this category, and in short employed in more creative jobs, will grow at a higher rate than the remainder. Taking into account the data available on the major cities of the USA, Florida has found in empirical tests that the most “creative” cities have experienced higher economic growth in recent decades, generating quality employment with higher salaries.

A basic characteristic of this theory, which distinguishes it from traditional approaches based on human capital, is that the creative class does not necessarily imply the existence of a high level of education. Along these lines, there is also a group of people with a high level of education who may be unemployed or not part of the working population and thus cannot be included in the creative class. In short, this new theory has led to a significant progress in the traditional concept of human capital that was based only on the level of education.

The proposal of the “creative class” is worked out within this framework, being defined as a category of workers from the following sectors: (i) science and engineering; (ii) research and development; (iii) high-technology industries; (iv) aesthetics and design industries; (v) culture, music, and the arts, and (vi) health, the economy, and the law.

According to this approach, creative workers are those meeting any of the following requirements. They may have a special talent in connection with a specific area of knowledge; they may have specific technological skills, or at least accept that new technologies are potentially relevant to their creative activities. They bring to these activities certain values and attitudes of tolerance which foster the exchange of different viewpoints and cultures, thus developing a universal and plural concept of citizenship.

This definition includes the three key concepts of the theory of economic growth based on the creative class: Talent, Technology and Tolerance (the 3Ts) which represent the core of its methodology.

After the breakthrough of the so-called Theory of the Creative Class, a wealth of research has appeared on various countries, regions and cities with the main objective of measuring the stock of creative capital and analyzing its effects on economic growth by taking into account the level of income, salaries, and employment. These studies include among others those of Florida and Tinagli (2004) on Europe; Li and Florida (2006) on China; Marlet and Van Woerkens (2004) on the Netherlands; Mellander and Florida (2006) on Sweden; Tinagli and Florida (2005) on Italy; Gabe et al. (2012) on Unite States; Casares (2010); Pesquera et al. (2010), Casares et al. (2011), and Coto-Millán et al. (2012) on Spain; and Cruz and Teixeira (2014) on Portugal.

This study analyzes the effect of creative capital on human development that has been estimated by means of the Human Development Index developed by the United Nations, which measures the quality of life of the population.

It was also found that there is convergence between the autonomous regions for the period considered according to the Human Development Index.

It has also been shown that the social and human capital have positive and statistically significant effects on the evolution of the Human Development Index.

We recommend that further research should be carried out in order to test other variables in connection with Human Development Index apart from those used in this study, and that the research period should be extended.

Florida, R. (2002a): The Rise of the Creative Class. And how it’s transforming work, leisure, and everyday life. New York: Basic Books.

Florida, R. (2002d): “The Rise of the Creative Class: Why cities without gays and rock bands are losing the economic development race”, Washington Monthly – May 2002.

Florida, R. (2005b): The Flight of the Creative Class, Harpers Business.

Mellander, C. and Florida, R. (2006): “The Creative Class or Human Capital? Explaining Economic Development in Sweden”. No 79, Working Paper Series in Economics and Institutions of Innovation from Royal Institute of Technology, CESIS – Centre of Excellence for Science and Innovation Studies.